Posts: 9,172
Post Likes: 71
0
+
LIKE THIS POST
Yes, I bet the Cowboys give Dalton playing time in 2020 to assess how he performs in the Cowbys offense with all those weapons around him. The only real weapon Dalton had at Cincinnati was A.J. Green, now he's got two top flight wide recievers and an elite running back there's no telling what the red rifle could accomplish with that cast around him. If Dalton performs well I wouldn't be surprised if the Cowboys got rid of Prescott for first or second round pick in 2021. I don't think he will be cut, the Dallas know they can get something for him.

I bet Dak is getting very nervous now considering also Cam Newton cannot find a club and he is in my opinion better than Prescott.

Dennis: The simulator is based on current power rankings, I believe. From the looks of most 2021 Mock Drafts, many believe the Jags, Redksins, Bengals, Panthers and Phins will all be selecting in the Top 5 (some have the Bears rather than Panthers/Bengals).

Posts: 26,189
Post Likes: 1,039
0
+
LIKE THIS POST
Honestly, I don't care how well we do in 2020, especially if we let Tua sit for the entire year. Let Fitz age even more and lose us some games so we can have a better draft pick. All the guys were drafted are developmental anyways, so it's not like 2020 won't be more than a learning experience for them. Besides, we didn't draft all that many skills positions, so the players we did draft won't make that much of a difference with Fitz. I'm hoping we are competitive, but I would love to have another Top 5 Pick next year. I also want the Texans to be a dumpster fire, allowing us to have two picks in the Top 10. We could probably get Chase and Parsons, as you drafted in your simulation Matt, if that were the case. We could then get a pass rusher (if Clowney doesn't realize we're perfect for him) and a RB or another WR in Round 2 next year. Oh well, at least we got a late bye.

Posts: 9,172
Post Likes: 71
0
+
LIKE THIS POST
Did you guys know that months before he tranferred to LSU Joe Burrow was at Ohio State where he got beaten out for the job of starting quarterback by Dwayne Haskins who is younger than him?

'During that spring, the Buckeyes had an open quarterback competition, and current Redskins quarterback Dwayne Haskins beat out Burrow for the job'.

I hope Burrow has a better start in the NFL than Haskins otherwise he is going to get crucified by the press.

Looks like the Ravens will be in the Super Bowl next year, they've been given the easiest schedule in the NFL. Patriots are going to struggle, looks like they will be getting Lawrence or Fields in next year's draft. Stidwell or whatever his name is is just being thrown into the deep end. He hasn't got a prayer.

I could go on and on. Basically, one of the 4 Conference Championship teams WILL flop this season. It happens every time. Last year I wrote that I thought either Kansas City or LA Rams would flop, and was proved right. So Kansas City, San Francisco, Tennessee, & Green Bay better watch out.

My candidate is San Francisco. In a similar way that Atlanta and Jacksonville lost while having significant leads, SF had that 20-10 4th quarter lead. They've also had a fair few retirements/trades. Plus, they're in the toughest division in the NFL.

As for Baltimore, Lamar Jackson is 0-2 in the playoffs, and Baltimore have been beaten in both HOME games by scores of 17-23 (3-23 before garbage time) and 12-28 (were the #1 seed facing the #6 seed). Baltimore and Jackson need to prove that they can handle the pressure.

Posts: 9,172
Post Likes: 71
0
+
LIKE THIS POST
Yes, I think you are right Matt, recently it seems to be the team that lost the Super Bowl which has a disappointing following year. Rams, Eagles, and Falcons come straight to mind. Which as you suggest would mean it's San Francisco's turn this year. Two things why I personally think it will be the 49rs, first they have lost a couple of key personnel and the team will not have confidence in Garapollo.

During the 80's it was the team that lost the championship game which would come roaring back and win the Super Bowl the following year. Giants, Bears, and 49rs come straight to mind. Doesn't happen now for some reason, it's almost as if teams have one opportunity (unless you are the Patriots) to win the big game and then you team gets ripped apart by free agency.

Still no movement with Clowney, Prescot, or Newton. 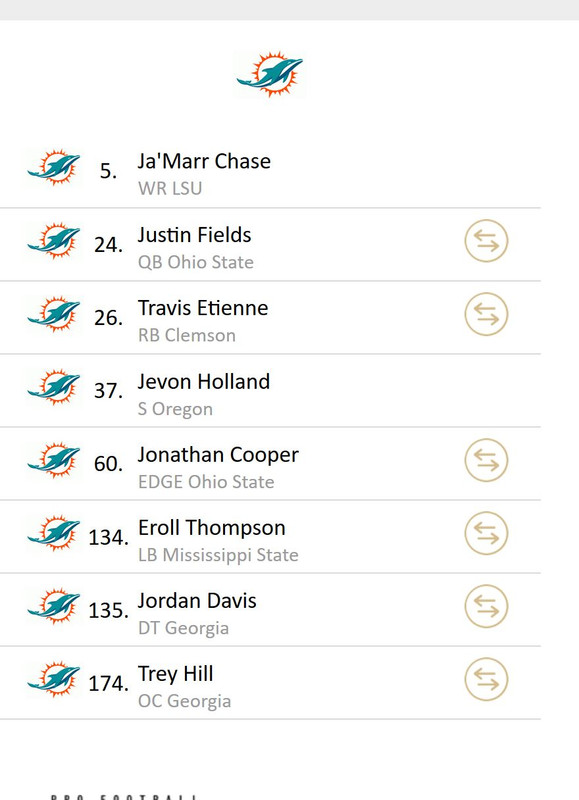 Justin Fields fell so far that I couldn't pass him up

Posts: 26,189
Post Likes: 1,039
0
+
LIKE THIS POST
Matt: We don't need any prime time games with the third toughest schedule (only two games difference between having the toughest schedule of all). Honestly, we'll be lucky to go 6-10, and that's only if we split with the Bills, Jets & and Pats. I don't think it will happen, but we could honestly lose every single game. Top 5 Pick - Here we come!

Dennis: Newton won't be signed until someone can give him a physical. Clowney has no pressure to sign now that the draft is over; someone will sign him over Summer. Dak has until the Tag Deadline to sign a long term deal, which is like in July. No rush for any of them.

The problem though is that if we lose our first few games, the media and the NFL will put pressure on Miami to bench Fitz and start Tua early. Remember last season the NFL were about to start investigating us for tanking, and vola we suddenly started Rosen. Zero teams can escape not starting their rookie QB early when losing. It happens every time sadly, and there will be no exception. We'll see Tua start at some point in the first half of the season.

We're screwed from the start. AT Patriots?!? Are you kidding me? The only bigger screwjob Week 1 is Brady having to face AT Saints.

Also in the past few days, NE have said they are still open to bringing in another QB.

It is almost a certainty now. And I don't need to mention what 'it' is.

Don't like: New England at 6-10 (they may win the division), Cleveland at 12-4 (overrated, and play Baltimore & Pittsburgh 4 times combined), Washington at 1-15 (they are not winning only 1 game)

Loathe: Carolina at 9-7 (they are going at best 1-5 in that division, which would mean they need an 8-2 non-divisional record. Considering the season they just had, that is almost impossible)

I don't think I'll have time to do the whole thing, but I'll do one without W-L records:

Posts: 9,172
Post Likes: 71
0
+
LIKE THIS POST
Unnamed coaches around the league are saying that if the Las Vegas Raiders were to have signed Cam Newton they would be a serious threat in the playoffs with the possibility of going all the way. The problem though is the Raiders have now signed Marcus Mariota so he is unlikely to go there. I wonder what Jon Gruden thinks about these other NFL coaches double guessing him.

Tom Brady and the Buccaneers against Brees and the Saints in week 1. I can't wait for that one. I'll be rooting for the Bucs. I expect the Saints to win seeing as they are at home, could be interesting though if it is close.

You guys probably won't agree with me but I take Miami to upset the Patriots and for the story to be the main headline the following day. Team morale right now must be a lot higher at the Dolphins ground than it is at the Patriots. New England have just lost the greatest quarterback to ever play the game while the Dolphins have picked up a rookie who they expect to be the next Dan Marino, that organisation is buzzing with excitement and expectation. I take Fitzgerald to do his magic and pull off an upset.

Redskins 1-15 Warrior13. Really? I have them winning about four games. I won't be too upset if it is 1-15 though as it means we'll have Trevor Lawerence or Justin Fields if the Jaguars don't win a game.

Posts: 15,284
Post Likes: 271
0
+
LIKE THIS POST
Cam Newton would've had little chance of success with Las Vegas. Their defense is a major issue, and they reached for Damon Arnette (boom or bust) in the 1st round. Las Vegas are overrated due to the media's love affair with the city of Las Vegas, and with Jon Gruden. If Carr can't get them playoffs, neither can Newton.

It's not such a bold prediction Dennis. In Miami's last game, they upset Brady and NE 27-24 away from home and took away their 1st week bye, despite having one of the worst rosters in NFL history. Now they'll return to the same venue with a better team, and will play a weakened NE team. Logic says it's a 50/50 game, but the pessimistic side of me can't see NE losing too many games this season.

Credits to KingofCorn for the awesome avatar!
Reply Quote & ReplyMulti Quote
Back to the top
Displaying Page 209 of 214
First | 2 | 3 | 4 | ... | 207 | 208 | 209 | 210 | 211 | 212 | 213 | Last     Previous | Next
Subscribe to topic
Login in above or register to subscribe to this topic.
You can subscribe to receive an email when someone replies to this topic.
We will only send 1 email to you if there has been 1 or more replies since your last viewing. You can unsubscribe again here or in your account settings pages at any time.
Low Bandwidth
Currently viewing this thread: Warrior13
REPLY IN THIS THREAD
Smilies, click to use