Posts: 27,486
Post Likes: 1,053
0
+
LIKE THIS POST
Matt: The Pats have the toughest schedule next year; not sure they will be winning the division. The Jets have the second toughest schedule, but they could easily do better than 3-13 if they sweep the Dolphins and win other toss ups. The AFC North have the easiest schedules, so Browns could easily go 12-4 if they groove. Don't underestimate the Panthers; I can see them being competitive enough to split in the division and go 3-3, making 9-7 feasible.

Dennis: Sorry, but I can only see the Redskins winning like two games next year at this point. Those are VS Giants and VS Bengals. As I said, I just went week by week. I think I had them beating the Giants and losing to the Bengals, but that was mainly because I had the Bengals winless at the time.

If you both have the time, do the simulation for yourselves. You might be surprised by your results. ;)

Posts: 15,927
Post Likes: 273
0
+
LIKE THIS POST
NY Jets with a 9-7 record, while as you say having the 2nd toughest schedule in the league? When did Bucky Brooks start posting on this forum? xD

Also with Carolina, I can't see them sweeping Atlanta and beating New Orleans once.

If the Jets sweep the Pats and Phins, they can feasibly go 9-7.

I have the Panthers defeating the Saints, Bucs, and Falcons when at home, at least at the moment.

Posts: 15,927
Post Likes: 273
0
+
LIKE THIS POST
Sorry, I started doing the simulation but quickly realised it would take a very long time. Maybe I'll change my mind later. However, I started with NY Jets and Carolina having 0-1 records ;)

Posts: 9,723
Post Likes: 75
0
+
LIKE THIS POST
Looks like the Dak Prescott deal is not going to go through. Jerry Jones has dug in, not looking good for Prescott now, Dak has cut his own throat by being too greedy. I can't see the Cowboys wanting him now as their long term quarterback after the way he has behaved. He has clearly put getting 'his' money over the team. I'm seeing a lot of analysts who were previously supporting him turning against him. Joe Theisman the former Resksins quarterback said publically 'Dak is an idot not taking the money offered'.

Posts: 15,927
Post Likes: 273
0
+
LIKE THIS POST
Dallas franchise tagged Dak a while ago now. When you've been tagged, it serves as a 1-year deal, meaning that he won't be offered a new contract until the 2021 offseason.

Interestingly, Cousins told reporters that after the Minnesota @ Dallas gave last season, he gave Dak advice in case he was franchise tagged at the end of the season. He said that he told Dak the franchise tag isn't such a bad thing, because it gives you leverage. After all, Cousins got paid a fully guaranteed contract at Minnesota despite being a primetime choker at Washington.

Posts: 9,723
Post Likes: 75
0
+
LIKE THIS POST
I'm in no way a Dallas fan but it is a shame that one player's greediness is ruining what could be a Super Bowl contender. Funny enough, Prescot and Cousins to me are in the same bracket. They both funny enough were fourth round draft choices and both are flawed. One chokes and the other is only good following scripted plays.

I don't know why Dallas franchise tagged Dak. I don't know the exact figures but it's something like 33 million this year, 38 million next year, and finally another 40 odd million. I also heard that at the moment the Cowboy can rescind on Dak's franchise tag. Makes me wonder if the Cowboys staff are putting Dalton through his paces now to see if he has got what it takes to take Dallas to the next level and if he does move on from Prescot (That's what I would do anyway). No way would I pay Prescot and screw up the team. It will be interesting to see what Jerry Jones does, especially when you take account he was once a Mississippi riverboat gambler.

Posts: 15,927
Post Likes: 273
0
+
LIKE THIS POST
Just letting you know that Warrior is blackmailing me to either do the win predictor for the entire schedule, or else he won't post here again lol. And since I'm busy, it may just be us for a while since He is too stubborn

It's ok though. We can talk about how, after Warrior told us how good he was at tipping, we both beat him convincingly in the 2019/20 tipping competition

(sorry for weird talk and lots of smileys. It's 1:07am and I've just finished working)

Posts: 9,723
Post Likes: 75
0
+
LIKE THIS POST
I can't see the point of trying to predict games at this point. Every team has made changes to their personnel, added new plays, etc. It's not until about week 3 or 4 that you get a handle as to what teams are capable of doing. The same goes for the pre season, teams are trying out new players and plays etc. I'm waiting for the season to start before I start predicting games. I would have thought Warrior13 would be more determined than ever to win the competition this year.

Posts: 15,927
Post Likes: 273
0
+
LIKE THIS POST
Oh, he definitely will be. I know from experience, that it's very annoying to lose a tipping competition despite being one of, if not the best tipper in the competition.

But it will be interesting. We've all proved that we are good tippers. I know you didn't win the last one, but you came very close. At least we will go into next season believing that any of us can win. This time last year I was convinced that Warrior would thrash us.

Not sure about Dallas at 14-2 either to be honest. I can see a 10-6 record and eliminated in the divisional playoffs by the first team they meet. Dak's holdout will be blamed for their dismal showing.

I can see Kansas being 14-2 or close to it though. I'd love to see your Super Bowl though, but for Brady to win it for the Bucs. That would be a great Cinderalla story.

I hear that the Dolphins plan on playing Tua in his rookie season, maybe not straight away but at some point during the season, the guys number 1 Dolphin jersey is selling like hot cakes, everybody is buying it. Flores may be pressured into playing Tua sooner than he would have liked.

Your way-to-early picks look similar to mine. Here are my initial thoughts...

1) I tried telling you the AFC North has an easy schedule. I know it might not happen, but the Ravens, Steelers and Browns could all win 10+ games and make the playoffs.

2) I don't see anyone going 15-1, but if one team were to do so, it will be the Ravens with that creampuff schedule. Seahawks are a different team on the road, no way they 15-1. They'll be 11-5 at the best, mark it down. Tampa is in one of the toughest divisions, no way they go 15-1 either. Mark it down: The winner of that division will be 13-3 or worse.

3) The Vikings are such a better team than the Packers. I can't see the Pack winning the division, especially should Rodgers be upset about them draft Love and intentionally plays bad to start.

4) The more I think about it, the more I can't see the Pats doing well. I think it's more likely the Jets have a better record than them. No matter the case, I can't see the AFC East Winner going any better than 11-5.

5) A lot of people have the Giants as the surprise playoff team this year, and a number have the Colts as a Super Bowl Contender. I don't see it, but you never know.

6) I tried telling you that the Skins have a difficult record. Honestly, I can't see them defeating anyone but VS Bengals and VS Giants. Obviously, that could change when the season starts.

Dennis: It's just for the fun. You know, to see how things appear now but end up shaking out.

Via Data & Analytics, These Teams Have The Highest Chances Based On Players & Schedule To have The #1 Overall Pick Next Year:

Dennis:
Brady and Gronk winning yet another SB and dominating the league would be a terrible story. We essentially have the Tampa Bay Patriots here. This is the same dynasty that we have seen for almost 2 decades. I hope Tampa Bay miss the playoffs completely.

As for Tua, sadly I think you're right. He potentially could start in Week 1. Even if he doesn't, if as I predict Miami start the season poorly, there would then be a 100% chance of Tua starting. Actually 100%. Literally no team can escape from starting their rookie QB when they are losing a lot of games. Flores needs to come out now and say publicly that Tua is the 3rd choice QB, and that Rosen is the backup to Fitz. Otherwise Tua will be thrown in with the wolves like Haskins was.

Warrior:
3 - Don't ever count Green Bay out. No matter how good/bad they are. They're a slightly better version of the Pittsburgh Dogs. With Rodgers at the helm, they should never be heavy underdogs in any game. I can't see them not winning the division.

4 - My NE picks were slightly pessimistic. I will only rest easy when Cam Newton signs with a different team, Stidham is proved to be a bust (even though I think he will succeed), and Jacksonville select Lawrence.

5 - Those people that think Indy are a SB contender (and who think Philip Rivers is their savior when really he is a bridge QB) are on crack. Potentially they may get a wildcard spot, but they're not winning the division, and Rivers isn't able to win 4 consecutive away postseason games.

Also I can't see Seattle falling apart. Wilson would possibly be able to lead Jacksonville to the playoffs. Remember, if not for an awful penalty and even worse playcalling, Seattle would've won the NFC West and sent San Francisco to the #5 seed. 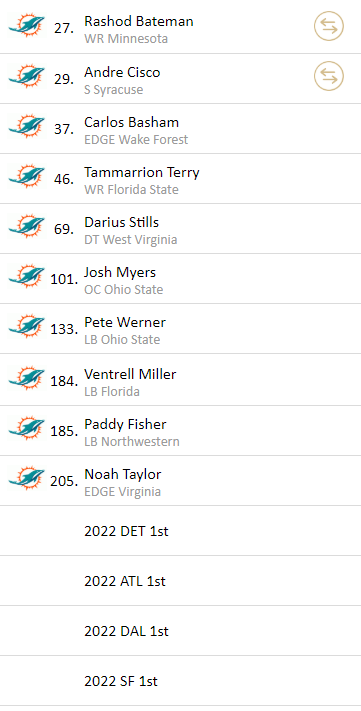 Rodgers has spoken. There is a 5% chance that he will end his career with Green Bay. He basically admitted that while he understands Green Bay were looking for the future, it means he probably won't be able to end his career there like he planned to. But he's definitely staying put for this season.