Posts: 15,481
Post Likes: 272
0
+
LIKE THIS POST
WHAT?! Cam Newton MVP?! What are those people smoking?! His 15-1 MVP season was a fluke, and he ended it by playing an awful Superbowl. There are several QBs which are better than peak Cam:

Posts: 9,212
Post Likes: 72
0
+
LIKE THIS POST
That is probably a good move by Mahomes when you consider what is happening with the uncertainty of the NFL with Covid. For all we know Covid could permanently close down sports worldwide until a vaccine is discovered which could take years. At least this way Mahomes is guaranteed 150 million no matter what happens. I'd be a bit nervous if I was a Kansas City fan, talk about putting all your eggs in one basket if something should happen to him...

Latest betting odds for the Redskins name change. I dont's particularly like any of them to tell the truth. Why can't they think of an intimidating name like marauders, hunters, gorillas, outlaws, predators, raptors, terminators, venom, wolve. I can just see it now they are going to be called the Washington Redtails and have that poxy P51 WWII Mustang as a logo.

Posts: 26,232
Post Likes: 1,042
0
+
LIKE THIS POST
It's actually 140 Million INJURY Guarantee. His ACTUAL Guarantee is way more than that, but the number hasn't be shared. Should he continue to play at the level he has thus far, Mahomes will easily earn all $475 Million (and more from bonuses) over the next twelve years.

Cowboys are idiots. Price on Dak, even though he doesn't compare to Mahomes, has gone up. He'll definitely be closer to that 40 Million per year mark now.

Posts: 15,481
Post Likes: 272
0
+
LIKE THIS POST
Yeah, the contract is actually $503 million, with $477 million in guarantee mechanisms (I think this means that parts of the guarantees can be voided if injury occurs etc).

As for Dak, I can't believe his greediness is going to pay off. Dallas offered him $36 million a year over 5 years, and he declined the offer. That is overpay by $11M/year. Dallas were right not to offer him $40M. Sadly they will have to offer him even more than that now.

Dennis - The only 2 names I think are ok in that list are Redtails and Redhawks. Every other one is horrific. Well, except for Snowflakes

. But still. If that is the list that Washington will be considering, I really hope that the favourites Redtails win out. The Washington Generals would be the worst team name in the NFL.

Also, I only just thought of this. But what if Washington are going to be the new London team? If the NFL want this, they could instruct Washington to give themselves a name which would be associated to themselves when/if they move to London post-lockdown. London is also to the East, therefore they could stay in the NFC East.

Posts: 9,212
Post Likes: 72
0
+
LIKE THIS POST
Looks like the new Washington Redskins name has already been agreed. From what I have been hearing the new name is the Washington Redwolves. Apparently wolves are very symbolic in north American culture and the RedWolves are a famous US navy helicopter squadron based in Washington 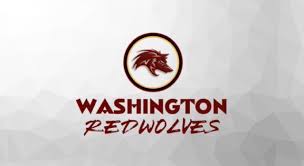 Just in case you are wondering what the source is for this logo it is Fed Smoot, the former Washington Redkin player.

I can't see the Redskins team moving to London, there has to be a team in the nations capital.

Matt: The Mahomes contract will be shredded in in about six or seven years when they reconstruct it for both sides. Mahomes will deserve more per year then, and the Chiefs will need to adjust for the Salary Cap. They both know this. The ten years is only a formality so fans know that Mahomes is a Chief for life.

Posts: 9,212
Post Likes: 72
0
+
LIKE THIS POST
I don't think the logo is official, it would be plastered all over the internet if it was. I think it's just a concept drawing. Not sure abut the one I found today though.

Matt, the previous one I posted looked OK but I prefer the one I have posted above. I like the way they have kept the same colours in the logo which although not as good as the indian isn't bad, I can live with it, put it that way. No, I don't know if the image above is an official image.

Warrior13, as for Mahommes, Dak Prescott owes him big time. Looks like Dak will get his money now that the Chiefs have splashed out.

When are the Chiefs changing their name? Aren't Chiefs indians? What about the Vikings and Raiders (pirates), didn't they rape and pillage and turn their prisoners into slaves. What about Patriots, didn't wealthy American colonials have black slaves. The Patriot logo shoes a soldier from that time period, are they going to be forced to change also?

Posts: 26,232
Post Likes: 1,042
1
+
LIKE THIS POST
None of those teams will ever have to change their names. Chiefs might originally have meant Indian Chiefs, but Chiefs is a pretty broad term these days. not to mention, their mascot is a mouse/rat. No sense already.

A Patriot is someone who loves their country and will fight for it. The term Patriot has nothing to do slavery.

Vikings aren't really pirates. They were historic seamen from certain parts of Europe. Regardless, Vikings and Raiders are safe because pirates are more fiction than real.

The Redskins caught a bad break because morons believed they were referring to a racial slur against Indians instead of the contextual meaning of Indian Warrior. All other teams are safe, the Redskins got screwed.

It looks like Washington Warriors is now the favourite to be the new name. The logo looks terrible. Basically the White House inside a Pentagon. I'll have to support another team if they go with that, I can't stand it. I know its only a logo but it juust doesn't feel like my team any more.

I bet Dan Snyder sells up, he probably feels the same. Changing the team's identity relegates the Washington Redskins to a footnote just like it did the Boston Braves before them.

Why can't they keep the current logo, stick the old spear logo in with it, and call themselves the Warriors? Like the logo that was on the previous page.

Posts: 9,212
Post Likes: 72
0
+
LIKE THIS POST
I really don't get what the problem is with Indian logo, the colour of the skin is that colour because that is their complexion colour. The Raiders logo is a white guy but I'm not jumping up and down moaning that the white guy is perceived as a bad guy. It's just a logo for heavens sake.

There's talk Washington may just be referred to as United or FC which is just boring.

I'd just be happy with Redskins changed to Warriors and keep the Indian logo. The Indian looks like a strong warrior type character to me when I look at it. I could understand it looked weak or derogatory. This whole thing annoys me, taking away that logo to me means it is a different team.

Posts: 15,481
Post Likes: 272
0
+
LIKE THIS POST
If they get called Washington United or Washington FC, people will immediately think that is a MLS (soccer) team. That cannot happen, surely.

Posts: 26,232
Post Likes: 1,042
0
+
LIKE THIS POST
I can't take present day media. I get that simpletons believe their nickname is racist, I even understand the disdain for the owner for allowing a hostile work environment for decades, but calling the Washington Redskins the "Washington Football Organization" while they are still deciding on a new name is one of the stupidest things yet with this whole saga.

Posts: 15,481
Post Likes: 272
0
+
LIKE THIS POST
It's because when they put out their statement of a name change, they still used a Washington Redskins banner on the statement, and people got angry (lol). Like you say, what were they supposed to do? Well this was the alternative.

Tomorrow, they need to announce themselves as the Washington Warriors, with a good logo that still has associations to Native Americans, and move on.

Preseason is in 2 weeks. If they decide to cut preseason to 2 games, it's still only a month away. Regular season is 6 weeks away. If possible, bring it on!

Also bring on any mock drafts if you have any.

Posts: 9,212
Post Likes: 72
0
+
LIKE THIS POST
Baltimore Ravens I think will win the Super Bowl if there is a season which I don't think will happen this year. Spain is drifting back into lockdown so it will probably happen in the US and around the world as well unfortunately.

AFC surprise packet will be the Dolphins, that is a franchise on the rise.

AFC major disapointment I think will be the Chiefs who everyone is expecting to repeat. I think they will get turned over by the Steelers or Ravens in the divisional playoffs.

NFC surprise packet I think will be the Eagles who will dominate the NFC East with Carson Wenz having the best year of his career.

NFC disappointment will be the Dallas Cowboys who although on paper look like an offensive powerhouse end up scrapping into the playoffs as a wild card.

The NFC representative in the Super Bowl will be the Eagles.

Looks like the favourite name for the Redskins is the Washington Redwolves, problem is someone registered the name in 2014. Looks like that guy hit the jackpot registering that name if Snyder decides to go with it. I still think Washington Warriors sounds better, I like the indian theme, I don't want to see a complete overhaul of the team image.

Chiefs vs Bucs seems like the early Super Bowl Pick. I would think both would be the #1 Seed.

AFC Disappointment? Has to be Bills. NFC? Most likely Seattle if Wilson gets hurt behind his horrible line.

Reply Quote & ReplyMulti Quote
Back to the top
Displaying Page 217 of 219
First | 2 | 3 | 4 | ... | 215 | 216 | 217 | 218 | Last     Previous | Next
Subscribe to topic
Login in above or register to subscribe to this topic.
You can subscribe to receive an email when someone replies to this topic.
We will only send 1 email to you if there has been 1 or more replies since your last viewing. You can unsubscribe again here or in your account settings pages at any time.
Low Bandwidth
Currently viewing this thread:
REPLY IN THIS THREAD
Smilies, click to use