Brings total to five when factoring in Gruden and Meyer. Usually between 8-10.

Hopefully the Phins can bring in Harbough from Michigan.

Posts: 10,184
Post Likes: 75
0
+
LIKE THIS POST
How is the NY Giants coach Joe Judge keeping his job? His play calling yesterday was atrocious, at times bordering embarrassing.

Posts: 16,228
Post Likes: 162
0
+
LIKE THIS POST
I'm down to keep playing with the current scores or to start at 0 with the playoffs and call the regular season a tie between you two, whatever you guys want. It's all just fun for me.

Broncos have also fired Fangio, that's another one.

Bizarre to me that guys like Judge and Rhule are staying while Flores gets fired. Just makes no sense and is another marker of a decade+ of Dolphins front office mishaps. I guess they're trying to poach Harbaugh from Michigan?

Posts: 10,184
Post Likes: 75
0
+
LIKE THIS POST
If Ron Rivera doesn't get a quarterback in the draft or someone of the caliber of Derek Carr in free agency and then proceeds to have another dismal year, I think he will be gone next year. Fans are losing patience with him, his record at the moment is strangely enough is exactly the same as Jay Gruden's before he was fired. Basically a losing record.

Posts: 16,047
Post Likes: 273
0
+
LIKE THIS POST
Ok, it seems that me and Warrior want the competition to continue, Mike is undecided, and Dennis wants it to come to a close. So by majority rules, the competition will continue! Anyone can still win the competition overall. We will have:

- The original competition, including playoffs (anyone can still win)

Reports are saying that Flores and Grier didn't get on. Flores wanted to trade for Watson, and Grier didn't. Also Tua and Flores supposedly had a heated argument during the Tennessee game. Still, it is a very poor decision. We were 8-1 in our last 9 games, with that loss coming away from home vs the #1 seeds. Now we are just as likely to get a dud coach.

Harbough is keen to sign an extension at Michigan.

Posts: 10,184
Post Likes: 75
0
+
LIKE THIS POST
Ok, great. As long as Matt and Warrior13 are happy with the competition continuing and waive their right to winning it under the original agreement I don't have a problem. steelers01 has no chance of winning though, he needs about 6 upsets just to get amongst the pack.

The playoff picture is not as clear as in previous years but I'm in with a shout, I just need one upset to get even with the leaders.

I thought the Chicago Bears were going after Harbough, I remember years ago a quartberback for the Bears called Jim Harbough, is it the same guy?

If Flores wanted to get rid of Tua for Watsoon then I think the Dolphins did the right thing getting rid of him. Hopefully his replacement will invest in offensive lineman to give Tua a chance to shine. No quarterback is going to look good without any protection, he needs 4-5 seconds for his receivers to get downfield and open otherwise he is relegated to short yardage passes because he has to get rid of the ball and people like Colin Cowherd tells the world Tua has a low ceiling and isn't any good.
I just get the feeling Cowherd doesn't like Tua for some reason, he puts him down on his show at every opportunity.

Posts: 16,228
Post Likes: 162
0
+
LIKE THIS POST
Yeah that Harbaugh is the same guy, he currently coaches for Michigan in college. His brother John coaches the Ravens.

Washington needs a QB but I m not sure who is available that would make the cost worth it over Heinecke. I guess thy could go after a guy like Carr or Cousins or Ryan but I'm not sure that puts them over the top next year. Heinecke wasn't exactly terrible this year.

Posts: 28,206
Post Likes: 1,054
0
+
LIKE THIS POST
Matt: Sounds good. If peeps want to break it up for Regular Season (we tied), Playoffs (brand new), and Overall (combining both), I'm fine with that too. I think we all know you and I tied, but I'm all for continuing to see if we can break the tie ourselves and not rely on Yahoo's score predicting metrics. Whatever is good for me. ;)

Dennis: I usually listen to Cowherd as well, but I have to turn him off when he bashes Tua. Tua had the comparisons of Brees coming out of college, and if my memory serves me correctly, Brees didn't skyrocket as one of the best until late with the Chargers and the start with the Saints. Tua is off to a much better start than Brees did with his career, and Tua is playing with a much worse O-Line and Rush Game. Just imagine where Tua would be if he had a just a decent O-Line and a guy like LaDainian Tomlinson at RB.

I hope Miami gets Harbaugh. It would really be the only move that justifies firing Flores.

Also, I saw a Mock Draft that had the Redskins trading up to get Pickett at #1 Overall. Not saying he will be another Burrow, but if he does, he can do some special things with the Redskins current roster. But it would cost them at least three first rounders to move up to #1, and I don't know if they would be willing to roll the dice like that after RGIII turned out to be a bust.

Posts: 10,184
Post Likes: 75
0
+
LIKE THIS POST
3 first rounders to move up and get Pickett is madness. I hope that doesn't happen, too much of a gamble. I'd rather use those picks on getting Russell Wilson or Derek Carr, at least I know those guys can put up decent numbers in the NFL.

Joe Judge got himself sacked with that 3rd and 10 quarterback sneak, the reaction from the Giants fans was hilarious, they were not happy.

Did anyone read the comments about Mike Zimmer the sacked Minnesota coach about Kirk Cousins? One of which was he dreaded being stuck in a lift with Cousins because he was so boring. He also said he wasn't bothered too much about being sacked, said it gives him more time in bed with his girlfriend who you should Google. I did just that and I have to admit he has a very valid point.

Posts: 16,228
Post Likes: 162
0
+
LIKE THIS POST
Lol. I like Zimmer. I think he's a pretty good coach, and the one year the Vikings really put it together they came up against that miracle Eagles team with Nick Foles. Since then they've kind of been treading water but I'm not sure how much of that is Zimmer's fault vs. it just being subpar roster construction and injuries/COVID opt-outs. I think he'll find work soon if he wants it, though I wouldn't be surprised if he finds more interest as a defensive coordinator.

Posts: 16,047
Post Likes: 273
0
+
LIKE THIS POST
Washington shouldn't, and can't trade up that far. It backfired with RG3, and last season there were rumours of Washington trading up for Fields. Had they done so, it would've probably also backfired (early verdict is that he is a bust).

They played playoff teams 8 times and went 2-6, but only 1 of those losses was by more than one score (when Cousins was out). Also in general, only 1 of their 9 losses was by more than one score. They played everyone tight, and a little improvement could see them make a big jump. Cousins had an ok year, and they have a very capable rushing and passing game. Defense needs to improve though.

Posts: 10,184
Post Likes: 75
0
+
LIKE THIS POST
You may be onto something there Matt, Cousins will have a fresh start with a new coach. The only thing is though will Cousins choke, he has a poor record against winning teams. Cousins is basically a bully, great putting up stats against weak teams but chokes against winning teams. It was why Washington wouldn't pay him, Minnesota thought he was the guy to take them to the Super Bowl a couple of seasons ago but hasn't worked out quite like that, they should have stuck with Case Keenum.

I am seeing Pickett in the Top 5 of basically every Mock Draft I can find.

I'm not saying you don't have a point with regards to the Vikings having a generally good roster, but it's a little disingenuous to insinuate they were a few plays away from being a top seed when you can do the same thing for almost every non-playoff team in the league.

Saw a draft profile on Pickett; comparison was a cross between Burrow and Carr. I would have also throw in Bridgewater into that mix, but that still sounds about right. A number of scouting directors believe he will be Top 3 after combine and pro days. I have him at #3 to the Texans, but I have seen plenty of mocks with him at #2 to the Lions (as well as that one with trades that had him going #1 to the Redskins). Again, I am not sure they would pull that trigger, but if the dude slips to #4-#6 range, I think they might.

Here is my Top 7 at the moment: 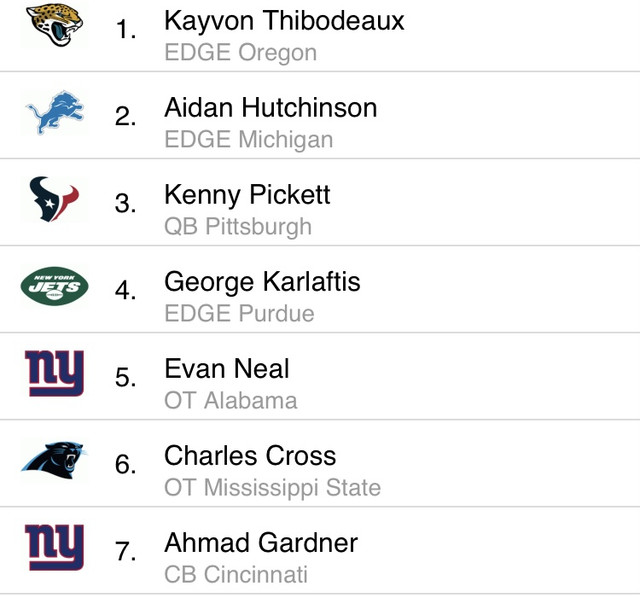 Reply Quote & ReplyMulti Quote
Back to the top
Displaying Page 349 of 353
First | 2 | 3 | 4 | ... | 347 | 348 | 349 | 350 | 351 | 352 | Last     Previous | Next
Subscribe to topic
Login in above or register to subscribe to this topic.
You can subscribe to receive an email when someone replies to this topic.
We will only send 1 email to you if there has been 1 or more replies since your last viewing. You can unsubscribe again here or in your account settings pages at any time.
Low Bandwidth
Currently viewing this thread:
REPLY IN THIS THREAD
Smilies, click to use