Posts: 28,770
Post Likes: 1,055
0
+
LIKE THIS POST
I am still not seeing you Dennis. Maybe double check if you join the group correctly? Try clicking and going through the email again that Matt had yahoo send you?

If you dont have the email, try clicking join private group. 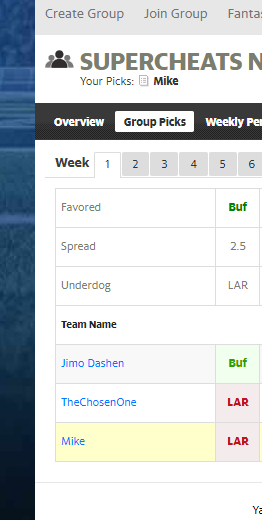 Posts: 10,707
Post Likes: 76
0
+
LIKE THIS POST
I wonder how many strange results we are going to see tomorrow night? I recall there being six or seven the first week last year, we all did terrible.

What's the story with Lamar Jackson, I read somewhere he has closed down talks about his contract negotiations with the Ravens. I had to laugh, the Baltimore fan base have started a 'Go Fund Me' to try and raise the money Jackson wants.

I'm now wondering if Jackson would be on Washington's radar if he become available, I don't think Wentz is the man, Hienecke can't throw longer than 30 yards, and Sam Howell is too inexperienced.

Posts: 16,667
Post Likes: 162
0
+
LIKE THIS POST
Jackson and the team had an unofficial deadline to get the deal done before the season started. He wanted a fully guaranteed deal like Watson got, the team offered 290M with 130M guaranteed apparently. They'll renegotiate in the offseason and I'm sure he'll get closer to what he wants.

I saw all of Steelers v Bengals and some of Eagles v Lions. Eagles have a great roster but I don't think Hurts has the arm to get it done. Detroit will not be an easy win for everyone.

Steelers defense looks great but the offense is awful. The sooner they get Pickett in the better. Lucky win, and couldn't capitalize on turnovers at all. Watt potentially tore his pec too.

Good win for the Phins and Commanders. Not often all our teams win, but it is nice when it happens. Hopefully more of it.

Thought my Panthers pick was gonna come through, but their defense crumbled. They needed that win.

Bears were a shocker. Niners just lost all steam in that second half. They could be in trouble too.

I took a chance with the Raiders and lost, I thought they would have performed better.

I'm a bit concerned about Tua, although the Dolphins won he threw several balls that I can only describe as 'floaters', even the commentator said the ball looked like it stayed in the air forever. What's happened to the laser darts Tua used to throw? Tyreek Hill saved one interception for sure.

Posts: 28,770
Post Likes: 1,055
0
+
LIKE THIS POST
He looked a little rusty. Plus, it is a new system to learn, so that could see him have some growing pains. The O-Line has also been rehauled, and it could take a while before they all gel together (the protect was just so-so yesterday).

He had basically 70% completion with 250+ yards against a Bill Belicheck defense, not to shabby for Week 1. Next week against Baltimore could be more telling.

Posts: 10,707
Post Likes: 76
0
+
LIKE THIS POST
I don't think Tua will have much trouble with the Colts. They only scored 3 points in the first three quarters on Sunday. The Texans let them back in the door with a 17 point fourth quarter. The Dolphin defense looked pretty good against the Patriots from what I saw.

Dak Prescott is out with a fractured thumb, apparently it needs a plate inserted into it. Is it he's throwing hand? If it is he may have problem with gripping the ball. I don't think it would have mattered much anyway, the Eagles are going to win the NFC East easily. Washington looked terrible in the secondary, they'll probably get picked apart by Detroit on Sunday.

Tough loss for the Broncos. A lot of people have been very high on them with Wilson but I honestly don't think they're a great team. Should've beat Seattle though.

TJ Watt might not have torn the tendon and might only miss the month instead of the season. Still rough as the Steelers defense looked bad without him and the offense is bottom 5 in the league.

Bears vs 49ers was sloppy, the weather was disgusting. I'm a huge trey Lance downer and maintain the only reason he's starting over Jimmy G is the fact they gave up so much to draft him. He stinks. Fields stinks too.

Posts: 28,770
Post Likes: 1,055
0
+
LIKE THIS POST
Broncos had some of the worst coaching I have seen in quite some time. Waste forty of the last sixty seconds doing hurry up only to call a timeout before the clock expires, and then you think you have better odds of kicking a sixty-five yard field goal over going for it on fourth and five. Absolutely horrible.

Fields has talent, but he will fail because the Bears have done nothing to build around him. Lance should succeed, but the jury is still out. I am still not even sold on Lawrence or Wilson. Lawrence seems to be as good as he will ever be, and Wilson is hurt all the time. Mac, the last of the five, is obviously limited.

I have two upset picks two, could be three if I'm brave enough to take Washington over Detroit. D'Andre Swift of the Lions was picking up 10 yards a carry against Philadelphia last week and the Washington linebacking corp is injured and atrocious.

The dilemma I have is Wentz turns up and decides he wants to play Washington could end up winning a high scoring game as he has no shortage of targets to throw to.

Aha, just heard Swift has a twisted ankle and may not play, that's made up my mind, I don't rate Goff, he's average at best.

I have to laugh at how fickle Washington fans are, a couple of years back all the talk of the town was of drafting Chase Young with the number 2 pick. Future Hall of Famer everyone said, now all I hear is everyone moaning and wishing they had of drafted Justin Herbert. Don't these guys get it, even if Herbet had of came to Washington the organization would have found a way to ruin him.

Chase Young is only 23, he's still got time. He'll probably get traded and be a superstar with another team in the NFL knowing my luck. Just wondering, the 1.5 years Young will not have played of his four years, does that contribute to his rookie contract?

Posts: 16,093
Post Likes: 273
0
+
LIKE THIS POST
It seems the only way I can account for the website not picking up Dennis's Buffalo pick, is to disqualify a prior game from the tally. For example, disqualify LA Chargers vs Las Vegas. Because Dennis was the only one to tip Las Vegas, it would mean that everyone else would lose a point, to make up for Dennis not receiving his point.

Would this definitely work? Could you all check the group picks to make sure my thinking is correct?

Not surprising to see the Tua haters coming out in force, yet again. If he wins, he's been lucky & should've thrown for more yards against weak opposition. If he loses, he's an overrated bust. Baltimore will be tough (and they are our bogey team), but the defense gives me a lot of confidence.

Credits to KingofCorn for the awesome avatar!
Reply Quote & ReplyMulti Quote
Back to the top
Displaying Page 386 of 390
First | 2 | 3 | 4 | ... | 384 | 385 | 386 | 387 | 388 | 389 | Last     Previous | Next
Subscribe to topic
Login in above or register to subscribe to this topic.
You can subscribe to receive an email when someone replies to this topic.
We will only send 1 email to you if there has been 1 or more replies since your last viewing. You can unsubscribe again here or in your account settings pages at any time.
Low Bandwidth
Currently viewing this thread:
REPLY IN THIS THREAD
Smilies, click to use