Forum Home > General Chat
Subscribe to topic
Login in above or register to subscribe to this topic.
You can subscribe to receive an email when someone replies to this topic.
We will only send 1 email to you if there has been 1 or more replies since your last viewing. You can unsubscribe again here or in your account settings pages at any time.
Low Bandwidth
Down to Quick Reply
Displaying Page 1 of 2
1 | Last     Next
balthiersbit Posted: 15:44 Aug25 2016 Post ID: 3421602
balthiersbit
Poop DinoQueen

Posts: 10,641
Post Likes: 188
0
+
LIKE THIS POST
Ive just read that a fan theorises that Rey in the new Star Wars film will actually be the ultimate villian and join Kylo Ren on the Dark side of the force.

The fan's argument is that she has not seen the force in action before so how did she know how the light side even worked? DId Ren open something up when he connected, was the saber really calling to her and woke the light side in her or is she really without knowing it becoming the next Anakin Skywalker?

Posts: 9,490
Post Likes: 74
0
+
LIKE THIS POST
I think Rey will turn out to be the niece of Obi Wan Kenobi, there's definately a connection there somewhere. Did you notice how similar they dressed? Posts: 10,641
Post Likes: 188
0
+
LIKE THIS POST
I'm more swayed to that general direction too. I do think there is a relation some how between the 2. Who her parents are or were I wouldnt know where to start.
Kylo Ren comes off as such a great bad guy yet so vunerable, maybe that's why this person came to this conclusion also. He doesn't come off as your regular bad guy once he meets Rey, she seems more powerful than him even in the 1st film, where they will go with it who knows. Shame they're doing this spin off first. 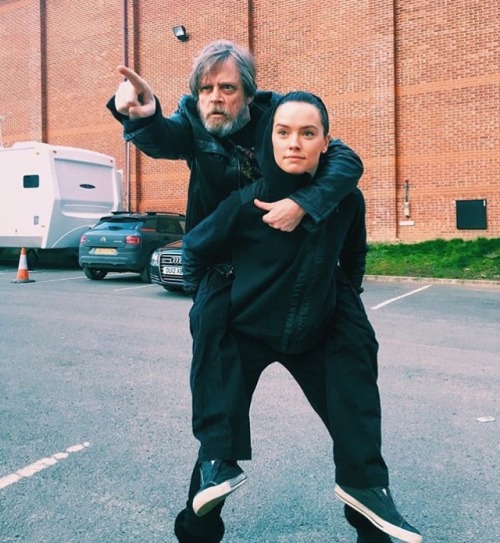 Posts: 10,641
Post Likes: 188
0
+
LIKE THIS POST
So is this trying to repair some of the damage that was done with the last trilogy? I was wondering why they were talking about who would play the young Lando.

Posts: 9,490
Post Likes: 74
0
+
LIKE THIS POST
I don't know if you have noticed but the last trilogy of dreadful Star Wars movies rarely gets mentioned now. It's as if Disney are trying to forget they exist as any reference from previous Star Wars films is always from 'A New Hope', 'Empire Strikes Back', and 'Return of the Jedi'.

And forgive me for saying this, but I don't think the prequel movies were that bad. Sure, they weren't as good as the originals, and then of course there was Jar Jar, but honestly, they were okay. They told the story of Anakin and his fall to the dark side, which is what they were supposed to do. Yes, there were some things they could have done better, and they did go on about politics a little too much, but I'm trying to be fair with them. They felt like Star Wars to me.

I REALLY hope they don't make Rey the daughter of Luke like some people have been saying. That would be way too cliche (but then again, that's never stopped Disney before).

Posts: 9,490
Post Likes: 74
0
+
LIKE THIS POST
The third one in the prequels (Revenge of the Sith) wasn't bad, it's just that all three of those movies relied on cgi too much instead of character development, something thankfully J.J. Abrams has corrected with 'The Force Awakens'.

Posts: 9,490
Post Likes: 74
0
+
LIKE THIS POST
CrypticWizard, if they made Rey the daughter of Luke the whole story would lose credibility, she has to be related somewhere along the line to another character which is why I'm thinking Ben Kenobi as she is obviously strong in the force and they come from the same planet. When Rey was held captive she used the same Jedi mind trick Ben Kenobi used on Mos Eisley to get past the stormtroopers, made me wonder who taught her that. Posts: 14,028
Post Likes: 226
0
+
LIKE THIS POST
She doesn't have to be related to someone to be Force-sensitive. It has to start somewhere. But I agree that she probably is. Luke's only sibling is Leia and Rey is not her daughter so she could not be Luke's niece. Obi-Wan's death occurred more than a decade before Rey was born she certainly isn't his daugther. Niece might be likely since we know little of Obi-Wan's past and any siblings he might have had.
I want my old avatar back...
I wonder if anyone will bother trying to read what this says.
Reply Quote & ReplyMulti Quote
Sanzano Posted: 01:39 Sep01 2016 Post ID: 3422043
Sanzano

Posts: 9,490
Post Likes: 74
0
+
LIKE THIS POST
I agree with you, she's probably going to be Obi-Wans niece, I can't see where else they can fit her in without coming out with a completely new back story which I don't think they will do. One thing's for sure, with a bit of training in the force poor old Kylo Renn will not stand a chance against her as he struggled in Force Awakens against her with no training, the Star Wars franchise is going to need a more powerful bad guy for her to fight...

Yeah Ben seems a good bet and yeah Kylo was awesome at the beginning, killing everyone and stopping bullets but he turned out to be rather weak towards the end.

Posts: 9,490
Post Likes: 74
0
+
LIKE THIS POST
I'm looking forward to the return of Darth Vader in Rogue One, he had an aura of menace about him. I think a lot of that came from James Earl Jones voice and Dave Prowse's imposing bulk and the majestic way he used it. The way all the commanders (except Grand Moff Tarkin) cowered in his presence just added to the mystique. Kylo Renn is pretty pathetic by comparison.

Posts: 10,641
Post Likes: 188
0
+
LIKE THIS POST
I think removing the mask didn't help that much, it killed the mystery for one and the fact he had such a sweet little baby face didn't help much either. (huge ears but we won't get in to that lol)

Posts: 9,490
Post Likes: 74
0
+
LIKE THIS POST
I 'm pretty sure I read somewhere that he is reprising his role as the voice of Darth Vader. Kylo Renn taking off his mask and looking like a high school nerd killed the character for me, in fact I was laughing in the cinema whenever he threw his little temper tantrums.

Posts: 2,123
Post Likes: 193
0
+
LIKE THIS POST
In this film Kylo was apparently still wavering in his dark side journey, uncertain. He seemed to make up his mind by the end though. Possibly a fight in the second movie will end up with him scarred in some way to up the sinister look or require a full time mask and then vader mk II will be in.
Remember also it was the emperor in the original trilogy that was revealed as the real evil one at the end. Vader was 'saved'. Kylo Ren may end up echoing this storyline. We need to see what powers the Snoke character has and how much impact he will have eventually.

Posts: 10,641
Post Likes: 188
0
+
LIKE THIS POST
Okay if they are planning on following the same path I can see that happen. I only hope that the original rumours are not true that the emperor is NOT JarJar Binks gone evil.