Forum Home > General Chat
Subscribe to topic
Login in above or register to subscribe to this topic.
You can subscribe to receive an email when someone replies to this topic.
We will only send 1 email to you if there has been 1 or more replies since your last viewing. You can unsubscribe again here or in your account settings pages at any time.
Low Bandwidth
Down to Quick Reply
Displaying Page 3 of 6
First | 2 | 3 | 4 | 5 | Last     Previous | Next
Sanzano Posted: 04:28 Apr02 2020 Post ID: 3450294
Sanzano

Posts: 9,172
Post Likes: 71
0
+
LIKE THIS POST
That's interesting, if I remember correctly the BCG jab was for tuberculosis and leprosy which would explain why it was handed out in India. Tuberculosis is a infectious disease that mainly affects your lungs which is exactly what Covid-19 does.

Does this sound familiar 'The bacteria that cause tuberculosis are spread from one person to another through tiny droplets released into the air via coughs and sneezes.'

Please tell me you and Warrior13 have had the jab?

Posts: 15,284
Post Likes: 271
0
+
LIKE THIS POST
Australia has one of the lowest tuberculosis rates in the world, so it doesn't consider the immunisation necessary. It can come with risks, so Aus decided against it. There are at-risk groups in Australia who would need the vaccine soon after birth, and they are allowed it.

The issue would be that HIV-positive people would not be able to have the vaccine, if the BCG vaccine can be used as an alternative coronavirus vaccine. The BCG vaccine can cause a person's HIV to accelerate (even more so for infants), and naturally it's a big risk because it increases the chances of it developing to AIDS.

Luckily African countries don't have many cases/deaths. Same with Russia. Those countries have very high HIV rates, for differing reasons. If cases spike, for anyone who can't get the vaccine, it becomes difficult. In Africa there isn't always the best medical care or resources available, and many people in Russia wouldn't seek help.

Still, if the BCG vaccine works, it will help 99.6% of people, and maybe we can be free of these lockdown measures...

Posts: 9,172
Post Likes: 71
0
+
LIKE THIS POST
Let's hope so Matt, my lockdown in Spain was supposed to end April 9th but I'm now told it will be extended for two weeks more. That's five weeks stuck indoors. Spaniards are dropping like flies, at a rate of nearly 1,000 a day. Worrying times.

The days are merging into one, it sounds like I'm working in a war zone with my son playing Fortnite and having his video conferences with three pals at a time and his phone ringing every 30 seconds with someone wanting to play with him.

From what I've read, the lockdown in certain countries will be enforced for a minimum of 6-18 months. That's if improvements like treatments and/or vaccines aren't discovered soon.

The mortality rate in Italy has now reached 12.3%. Essentially 1 in 8 people who get the virus will die. And this rate is growing daily. Spain's rates are nearly as high as Italy, and are growing too. However, Spain's daily cases aren't increasing.

France's cases and deaths have skyrocketed in recent days. The mortality rate there is 10%. They went from 500 deaths one day to 1355 the next.

The UK's mortality rate has also skyrocketed to 9.4%. Boris Johnson screwed up big time by delaying lockdown measures, because he was told that herd immunity (letting 60% of the population get the virus and 6% die) was the best option, before realising that wasn't right.

The US's rate is sitting at a good 2.7%. But cases and deaths keep on increasing. People who aren't living rural or in a place with empty space are in big trouble.

Despite almost full lockdown, Australia's rate is just 0.5%. We are 'flattening the curve' as they say. Daily cases and daily deaths aren't increasing. They're either flat-lining or decreasing. 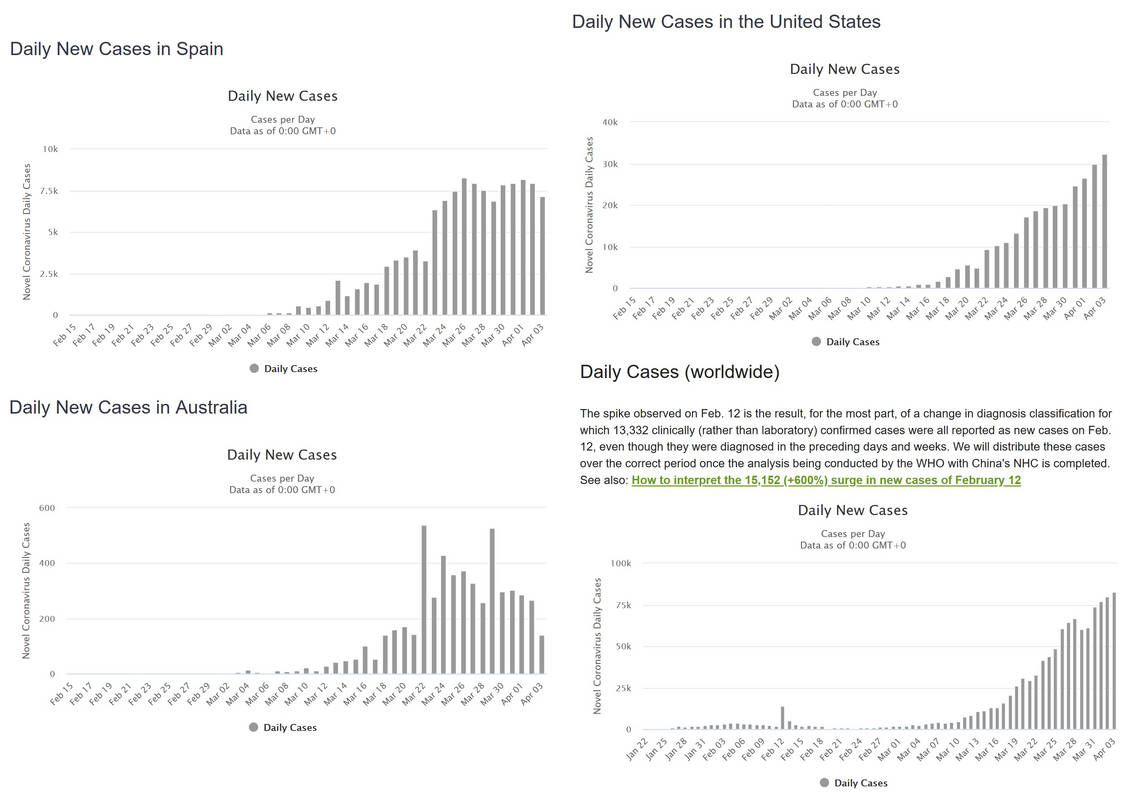 Posts: 9
Post Likes: 0
0
+
LIKE THIS POST
The latest Naruto game for Smartphone, can already be topped up at UniPin you know! Well, good news for those of you who play and top up Naruto Slugfest, if you play while #ditemeninUniPin, you will get exclusive item code and UniPin Credits!
Reply Quote & ReplyMulti Quote
Matt77 Posted: 07:21 Apr04 2020 Post ID: 3450322
Matt77
Tua SZN

Poor Dennis, he must have to run this site. Unless Rich and Mark are still active.

God forbid we get a serious bot issue. I remember years ago I joined a website for Super Mario Maker and it had some forums. It got overrun with over 200,000 bots because the website owner never checked the site or forums :(

Goodbye US Open. It was nice knowing you.

Posts: 15,284
Post Likes: 271
0
+
LIKE THIS POST
That's for the first wave. A second wave is almost guaranteed now. What will happen is that in June/July lockdown measures will be removed or lessened, and the virus will spread again.

So either cases will decrease and we will all stay in lockdown until probably September, or lockdown will be removed and a second wave will occur. Either option isn't good. But governments (except Trump) will not take that risk, and will choose option 1. Trump wants to re-open the country and economy ASAP, so I feel America will choose option 2.

I want to try and be optimistic. But Trump is reckless at the moment. Does he still think the virus is a hoax?

The economy will go into a depression if Trump doesn't open it back up by May. It's basically the lesser of two evils. You either open the economy and accept the death that will come, or you don't and a depression happens.

Trump doesn't think it's a hoax. There's actually documentation showing the Trump has been on this since as early as January, but most in the media went crazy when he did the travel ban to China, calling him irrational (among other things, like racist). It was actually the democratic leaders that wouldn't listen to him early on about the chance of the virus spreading to the world, but they are now the ones to be down his throat about stopping the spread and giving out free everything to the states hit hardest. The Stimulus Bill that Trump wanted for weeks was even delayed by the democrats until the republicans would give them a few unrelated things within the bill.

Craziness. George Washington was right when he said that political parties would be the death of all government. XD

Posts: 15,284
Post Likes: 271
0
+
LIKE THIS POST
But didn't Trump think the virus was a Democratic hoax to get him to lose the 2020 election? If not, that's the information we got here. He's changed his views in the past fortnight, but before that he was confident the virus wasn't a big problem. The good things he did before 2 weeks ago was implementing the China travel ban and that stimulus package.

The Democrats are too busy still whinging about Trump being elected president lol. If I lived in the US I would vote for them, but they just keep sabotaging themselves with stupid behaviour... A sane Democratic party could've ensured Trump lost the 2016 election.

Potentially that 2nd wave won't happen, but I'm just accepting the worst-case scenario now so that if indeed it does happen, I'm mentally prepared, and if it doesn't happen then it's great news.

Posts: 26,188
Post Likes: 1,039
0
+
LIKE THIS POST
I can't see Trump losing for re-election. It rarely happens to begin with, but he'll be going up against Joe Biden, who, honestly, has dementia. How sad is that? The democratic party is pushing for the best candidate to try to beat Trump, and it just so happens to be a guy that doesn't know Tuesday from Thursday anymore.

If you look up everything, you'll see most democrats were the ones down playing Coronavirus early on, even though Trump was doing travel bans and putting out referendum of a possible outbreak going way back to January. But now they want to point fingers saying he didn't do anything, even though he has all the newspaper articles and press releases proving otherwise. Time and time again, the democrats just shoot themselves in the foot.

Oh, I agree. There is probably a 95% chance of Trump winning the election. They were screwed from day 1 when the primaries were happening. No matter who got through, they were screwed. Biden is too bland, Bernie is too controversial, Warren is a woman, and Pete is gay

Actually laughable how badly they got their candidates wrong.

Credits to KingofCorn for the awesome avatar!
Reply Quote & ReplyMulti Quote
Back to the top
Displaying Page 3 of 6
First | 2 | 3 | 4 | 5 | Last     Previous | Next
Subscribe to topic
Login in above or register to subscribe to this topic.
You can subscribe to receive an email when someone replies to this topic.
We will only send 1 email to you if there has been 1 or more replies since your last viewing. You can unsubscribe again here or in your account settings pages at any time.
Low Bandwidth
Currently viewing this thread:
REPLY IN THIS THREAD
Smilies, click to use