A stolen voice, two brothers, and a lot of jumping around. Let's play Mario and Luigi Superstar Saga!

Forum Home > Video Game Boards > Mario Series > Mario & Luigi: Superstar Saga
Subscribe to topic
Login in above or register to subscribe to this topic.
You can subscribe to receive an email when someone replies to this topic.
We will only send 1 email to you if there has been 1 or more replies since your last viewing. You can unsubscribe again here or in your account settings pages at any time.
Low Bandwidth Favourite Forums
Add to your Favourite forumsYou are not logged in. Login to view your favourites or register with the link above.
Down to Quick Reply
Displaying Page 1 of 3
1 | 2 | Last     Next
pwnthemonkeys Posted at: 22:40 Jul30 2012 Post ID: 3134041
pwnthemonkeys
Village idiot

Mario and Luigi superstar saga was released in 2003, developed by Alphadream and published by (guess who) Nintendo.
It was followed with two sequels for the DS.

What's this game about?
The coming of age story of a young strong independent black girl.
Actually the princess is kidnapped again. No wait wrong again. The princess's voice is stolen and is replaced with explosive texts by a witch named Cackletta and her henchman Fawful. Mario must save the princess once again.

How's the game play?
It's kinda like Paper Mario where a well time button hit makes your attack stronger also it's turn base; but in saga a well time button press can completely avoid damage without doing counter damage. I'll explain some more in the first session.

Like my pokemon red lp, I will also be doing a challenge in this game, but I will let you guys decide which one.

Choice 1: I am only allowed to use the default equips and I cannot equip accessories.

Choice 2: All items in battles are limited to three per person.

Choice 3: I cannot revive a person in battle, I can not run away, and I limit the number of my saves for every save point.

Choice 4: All of the above.

choice 5:I must complete the entire game and write the LP without sleep

And that is all of the choices!


Since there is an image limit for every post and I want to reduce the multiple posting that is going to happen, I'll keep all updates in one post. If the update has more than 15 images then I'll just link the images with the commentary.
There was a sig here, it's gone now.
Reply Quote & ReplyMulti Quote
steelersrock01 Posted at: 22:46 Jul30 2012 Post ID: 3134044
steelersrock01

+
0
+
LIKE THIS POST
Aw sweet I loved this game! I never completely finished it though. You should do choice 3.

And btw, Crossy or someone else is going to want to move this, so I'm going to give you a few days to get an audience here then I'll move it so you don't lose anyone.

+
0
+
LIKE THIS POST
No problem dude. Hope the first part's up soon. And don't forget about your team. I'll read and comment on the update tomorrow if it's there, but I've gotta get off now. Work in the morning.

Used to play it, but never finished.

Tried playing it again, but got ****** off by all the re-spawning enemies everywhere.
Reply Quote & ReplyMulti Quote
pwnthemonkeys Posted at: 12:50 Aug01 2012 Post ID: 3134640
pwnthemonkeys
Village idiot

I choose Choice 5 instead. Hint to everyone:If you click Add quote and Reply at the bottom of the first post you can see choice 5

+
0
+
LIKE THIS POST
Doubting me?! Yeah chances are I'll fall asleep before beating the game or before finishing the writing. I hope there's no limit for posting links too.

Welcome everyone to the first session. This one is pretty much most of the intro to the game. It is 2:42 pm (GMT - 7:00 for those who care). I will be playing and writing without sleeping. Playing the game won't be the problem of the lp, but writing will. I expect to finish everything before noon tomorrow, but you guys wont be able to see all of my work for a while since I will be updating once a day, maybe twice if there's enough activity.
I'll have to be truthful for you guys, this session was capped the same day I posted the thread, but do not worry because I will still redo the game from the start. It's just that you won't see it.
Some sentences will have more than one link for images so remember to check. This session probably won't

Part 1: Cursing will curse your voice with nonsense.

Here we have our menu. Superstar saga, Mario bros (which I might show off in a bonus session), and the options.


Before we begin we have our saves, as you can see I did a run of the game before starting the LP, but I'll move that to file 3.
And start a new game

There seems to be a celebration at Peach's castle. 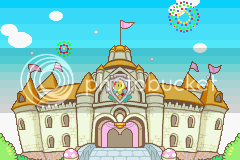 "The goodwill ambassador from Beanbean kingdom has arrived."

"I wish to improve my kingdom's ties with the mushroom kingdom."


It was all a practical joke, they just wanted to fart on her face.

Oh man, you used that laughy gas. Peach is going on a trip.


Our villains escape after sucking back the gas. 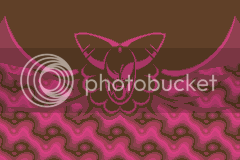 Luigi doing what he's good at, washing the clothes. Later on he will cook dinner.


Toad runs into the home of the Mario twins

And here the game lets us control a character. How about exploring the home first?

Not one of the smartest things to do


So it was Mario who was taking a shower.


Showing toad what knocked him out isn't going to wake him up.

We cut back to Luigi doing nothing of significance as usual.


And is then strung along to the castle.

Mean while back at the legion of the mushroom kingdom.

Peach crying, probably side effects of the gas or failing at baking a cake.

Oh god a shooting star out of no where.

Here's our first battle. We see Luigi freaking out and Peach still crying.

Toad will interrupt our battle for a bit, but we don't want his help. The battle system here is simple, press A to attack and before you finish the attack you hit A again and you'll double your damage. When your turn is over the enemy attacks, but you can avoid that by pressing A too. Since that is all we learn for now I'll explain the battle system some more when the game wants to.

Not pictured: the explosions caused by the gibberish


Mario you're a hero go do stuff!


Oh and bowser is going to help.

Here we now control Mario.
A to jump, D-pad to move. The usual.


Our first item. I'll explain items later on
But it belongs to someone else. Since we're good people we'll give it back and not because we keep it and get a better shroom.


Here's a block, hit it and get something. This one has a mushroom.

There seems to be a lost Koopa Troopa , I'm gonna help him


This guy lost something.
And as a reward a 1-up

For whatever reason I could not reach this block.


You win this time. 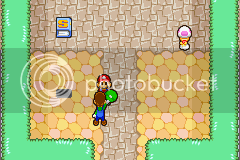 And I'll save the game.

Not! Next update we'll do that thing I just said.

This is the first session, but don't expect all of them to be this long!

+
0
+
LIKE THIS POST
Oh now I think I remember this game. There is a stupid Jump rope thing that I could never beat. Am I talking about the right game? ._.

Edit: It's 3:08 AM. I've capped enough for 14 sessions and I'm working on session 16. I'm at the point where Spoiler:
you have to make it to bowlette's castle place thing.
click to reveal
So I have around 1/4 of the game left for capping. I've taken 2361 caps, around 10mbs. If I were to keep going on, the writing would have been mostly me making a lot of spelling and grammatical errors since I would have started around 5am.

I failed at playing video games for the internet. D:


I prefer the system in the Final Fantasy games where you stroll about minding your own business, and every now and then enemies encounter you. Want to gain more levels? Run around in circles.

Nah in this game the enemies can be seen on the map and they all attack you at once. You feel like you're battling a bit too much before you can get anything done. I had the same thoughts about the Paper Mario games, although I almost beat the second one (got to the third final boss and died...seriously Intelligent Systems fuc.ked that one up by having four bosses in a row that you'd have to beat all over again if any one of them killed you).

« Last edited by Doctor Silent on Aug 2nd 2012 »
Reply Quote & ReplyMulti Quote
Back to the top
Displaying Page 1 of 3
1 | 2 | Last     Next
Subscribe to topic
Login in above or register to subscribe to this topic.
You can subscribe to receive an email when someone replies to this topic.
We will only send 1 email to you if there has been 1 or more replies since your last viewing. You can unsubscribe again here or in your account settings pages at any time.
Low Bandwidth Favourite Forums
Add to your Favourite forumsYou are not logged in. Login to view your favourites or register with the link above.
Members viewing this thread:
REPLY IN THIS THREAD
Smilies, click to use