Posts: 15,869
Post Likes: 161
0
+
LIKE THIS POST
I also think many people here just don't care about the Olympics anymore. For a lot of people from smaller countries it is a huge honor to serve your country an compete in the Olympics (see Luka Doncic and the Slovenian Basketball team) but in the US the athletes are used to competing in world class leagues against the best of the best already. Many of them just don't care about the Olympics and nationalism for lack of a better word is at an all time low. It actually seems like some of the US athletes actively dislike the country.

No clue about boxing, besides the fact that MMA has kind of overtaken it despite being different skillsets.

Posts: 9,902
Post Likes: 75
0
+
LIKE THIS POST
Boxing is my number one sport, and steelersrock01 is correct, it is dying. It has been for several years, MMA, the UFC in particular is more popular with younger sports fans. Again, lack of U.S. superstars is partly to blame. The last big U.S.name was Floyd Mayweather and he is long retired apart from a couple of exhibitions.

Lack of finacial reward will put off a lot of elite athletes from entering the Olympics who will instead focus on pro sports. For example, there used to be several Olympic medalist shot putters, hurdlers and track stars who ended up playing in the NFL. I bet these days those athletes just concentrate in getting drafted into the NFL.

Posts: 15,869
Post Likes: 161
0
+
LIKE THIS POST
Though one could argue that the potential income of being a world-class track star could outweigh a fringe NFL player with endorsements. I'm sure Usain Bolt isn't hurting for money. Though I don't think I can name any other track and field people, and can probably name a couple hundred NFL players. Kinda proves the point I guess.

Posts: 9,902
Post Likes: 75
0
+
LIKE THIS POST
Lol, yeah, having the undisputed title 'worlds fastest human' is going to get you a few endorsements and make you a bit of money. Bolt was even offered a try out with an NFL team, I forget which one was now. I know he ran a 4.22 at an NFL combine.

Posts: 27,794
Post Likes: 1,053
0
+
LIKE THIS POST
I think the odds of being Olympic superstar is far less likely than a sports pro. You see track guys get drafted al the time, better money and better odds.

Posts: 9,902
Post Likes: 75
0
+
LIKE THIS POST
Without a doubt, the Olympics is dying if the year is anything to go by. I literally can't be bothered to watch it year 84, 88, 92, and 96 I followed it closely. I don't know if it was because I was at an impressionable age but there seemed to be plenty of superstar athletes. Do you remember Daley Thompson, Edwin Moses, Steve Ovett, Carl Lewis, Michael Johnson, Flo Jo, Ben Johnson, Linford Christie, Lennox Lewis, Oscar De la Hoya, the list goes on. The only superstars I can name now is Usain Bolt and Michael Phelps and I think even they have both retired.

Posts: 9,902
Post Likes: 75
0
+
LIKE THIS POST
You're right, aside from the 100 metres sprint and a couple of other short track events there is no real excitement in the Olympics. Sports become exciting when you can identify with the players participating.

) and a couple of the swimming events, but that's about it. Biles talk ruined most of the former, and the USA dropped the ball on the latter outside of that one guy that won five golds.

Posts: 9,902
Post Likes: 75
0
+
LIKE THIS POST
Lol,an American wins 5 gold medals, you watch him do it and you can't remember his name. The Olympics is in trouble if that is happening, it literally means there is no interest in the individual competitors themselves.

An Italian winning Olympic gold in the 100 metres says it all about the state of the Olympics in America. You'd expect an American or African to win that, not an Italian.

Posts: 15,869
Post Likes: 161
0
+
LIKE THIS POST
I watched the American women win gold in beach volleyball last night. The men's basketball final is late tonight, I might watch that. Men's baseball finals is tomorrow but it's super early so I don't think I'll catch that. Other than those the Olympics is done for me.

Posts: 27,794
Post Likes: 1,053
0
+
LIKE THIS POST
I'm not even watching the basketball. USA usually wins, and I really don't like Pop ever since Duncan retired. He seemed to have come wheels off then imo.

Posts: 15,869
Post Likes: 161
0
+
LIKE THIS POST
Yeah idk what it is but Pop has seem really smug since the Spurs big 3 retired. I don't know if it's him trying to stay in the spotlight while coaching a bad team or what but the whole persona he gives off seems really fake and pandering. Plus he's done an awful job coaching Team USA since taking over for Coach K. Some of that can be written off as the international game improving but not all of it. The average "contender" like Spain or France has 1 or 2 NBA players while the USA team is top to bottom all stars and all-NBA. No excuses for their record lately.

Posts: 9,902
Post Likes: 75
0
+
LIKE THIS POST
You guys saw more of the Olympics than me, I just saw two races, the 100 and 200 metres. Nothing else interested me and even those races had nobody I had heard of.

I saw a documentary with some sports presenter challenging Ben Johnson to a 40 yard dash. Ben Johnson was in his prime in 1988 which was over 30 years ago and looks like an old man now carrying a bit of weight around the midriff. The presenter says to him 'are you still fast'. They had the race and the presenter got left standing. Ben Johnson ran a 4.43. That time is quick even by NFL standards.

Posts: 15,969
Post Likes: 273
0
+
LIKE THIS POST
The financial side is a big part, as Dennis said. You get no prize money from competing in the Olympics. You only get Government grants. And if you're not a superstar, you're not going to get much. My brother has a close friend who actually won 2 gold medals in the 2012 Paralympics. She said the lack of funding is the biggest problem for athletes in general, and also the Swimming Australia organisation being very cutthroat. She decided to retire after winning a bronze medal at the 2018 Commonwealth games, cause it wasn't worth competing anymore.

In tennis news, Federer is OUT of Toronto and Cincinnati (2 big lead-up tournaments to the US Open), and Nadal lost 4-6 6-1 4-6 in his 2nd match at Washington (after narrowly escaping in his 1st match). Federer's knee injury is back, and Nadal still has a foot injury from the French Open. Dire straits for both players.

Posts: 9,902
Post Likes: 75
0
+
LIKE THIS POST
Federer and Nadal will retire soon, neither probably wants to but both of their bodies are breaking up with age and they will get to the point they won't be a factor in grand slams any more. Both have enough money to walk away at any time. Once Djojokovich retires as well it will be the end of an era. 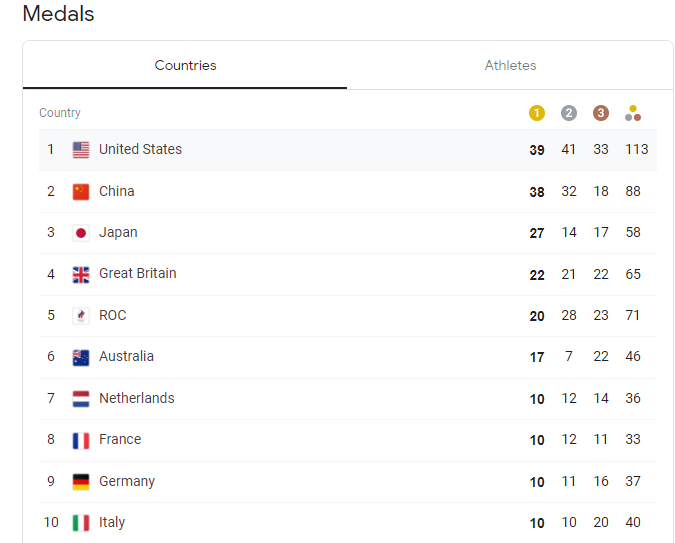 USA wins most medals overall and actually does end up winning most golds as well with some tournaments finishing up in the last 2 days and some other events.

Good showing from China, who always does well in the Summer games, and also a really nice showcase from Japan who've done much better than usual.

Posts: 27,794
Post Likes: 1,053
0
+
LIKE THIS POST
I'm surprised the USA finished with the most golds after the extremely slow start, but nothing shocking after that. Not sure why that list is in order of gold since it's based on total, but still good outing for Japan. Probs because they were home country.

Reply Quote & ReplyMulti Quote
Back to the top
Displaying Page 19 of 23
First | 2 | 3 | 4 | ... | 17 | 18 | 19 | 20 | 21 | 22 | Last     Previous | Next
Subscribe to topic
Login in above or register to subscribe to this topic.
You can subscribe to receive an email when someone replies to this topic.
We will only send 1 email to you if there has been 1 or more replies since your last viewing. You can unsubscribe again here or in your account settings pages at any time.
Low Bandwidth
Currently viewing this thread:
REPLY IN THIS THREAD
Smilies, click to use