Forum Home > General Chat
Subscribe to topic
Login in above or register to subscribe to this topic.
You can subscribe to receive an email when someone replies to this topic.
We will only send 1 email to you if there has been 1 or more replies since your last viewing. You can unsubscribe again here or in your account settings pages at any time.
Low Bandwidth
Down to Quick Reply
Displaying Page 1 of 1
Warrior13 Posted: 08:17 Jun01 2022 Post ID: 3458085
Warrior13
Jimo Dashen 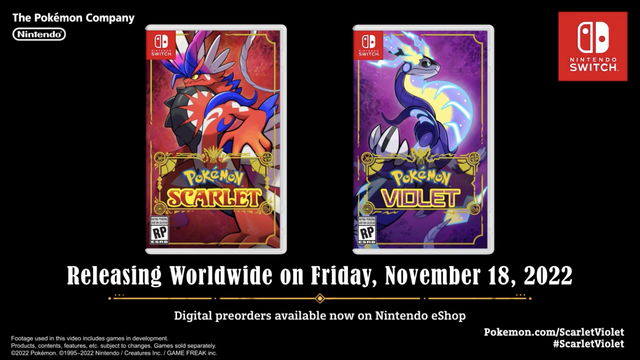 For the first time ever, there will be two different Professors. Not sure if this will play into a past/future theme or one about rivaling schools.

Nothing new about the Starters, so we will have to wait some more. New electric mouse, grass olive, and normal pig Pokemon. An NPC was also wearing a shirt that depicted a Tauros, which all but confirms that it will be getting an evolution or Regional Form as expected.

Still no idea about the region name. lol

Posts: 16,589
Post Likes: 162
0
+
LIKE THIS POST
Trailer looked okay. I like the legendary designs and the other ones they've shown. Graphics, as always, look pretty bad, It feels like Pokemon doesn't really have an artistic identity anymore. The games look like cheap mobile games now, something about the art is just unappealing. Not expecting too much different out of the gameplay from SwSh, I'm expecting them to keep the Arceus gameplay in its own series for the most part. I did read something about being able to fight the gyms in any order, which is a nice evolution from the gym differences between SwSh.

Posts: 28,640
Post Likes: 1,054
0
+
LIKE THIS POST
Yes, it seems like you can pick whatever path you'd like. That would be very interesting in terms of what Levels and Pokemon the Gyms have and how they vary with game progression. I still want to see if the rumor is true about there being a Gym for every type. I doubt it, though. Some are starting to believe Gym Leader Teams will have themes rather than be focused on one specific type, sort of like a weather team here and something else there.

Graphics seem okay to me, but I don't really know what to look for with that. You seem much more knowledgeable than myself in that regard, Mike, so I'll take you on your word. As long as the story is good, I will be happy.

It will definitely be more like Arceus than Sw/Sh, but I'm sure they do forward some of the stuff from the latter. The co-op gameplay seems interesting, but I doubt it will truly be like traveling with friends. Like your game has to still active all battles for your player and not the other, right?

Posts: 16,589
Post Likes: 162
0
+
LIKE THIS POST
Yeah I'm interested to see what they do with the levels too. Maybe they'll have some way of doing it so the first gym you decide to fight is always the lowest and it scales from there. The themes would be a very nice change. Weather team, animal type teams like a "monkey" team, that'd be super cool.

The graphics are fine for Pokemon, I'm just salty and miss the charm of the GBA/DS graphics and feel like they'd make a much better game if they weren't trying to make 3D graphics.

I'm not expecting much for the co-op stuff. It's definitely going to limited somehow, there's no way the whole game is going to be open multiplayer. The battles shouldn't be a problem, other players could just see your character in a generic battling animation or something.

As always, cautiously optimistic. I still haven't gotten to Arceus yet.

Posts: 28,640
Post Likes: 1,054
0
+
LIKE THIS POST
Yeah, I would love themed Gym Leader teams. Actually, it would sort of be an aspect that that moved forward from SwSh, as the last gym leader was more of a weather team than a Dragon Team.

Everyone is talking about the co-op, but Imma just play solo. Pretty sure 90+% of people will do so as well, especially the older players. Playing alongside a friend or family member doesn't really pique my interest now that I think about; it's not like it's real life and we're actually living in the world of Pokemon. lol

You gotta play Arceus, Mike. I'm telling you, it's the best since DPP & BW.